how to get the truth out of someone 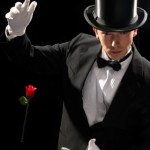 The Magic of Misdirection

If I were a magician, I’d hand out broken compasses. It’s all about misdirection.
~Jarod Kintz

The concept of misdirection involves distracting someone from a certain topic or fact with another. The brilliant part about using misdirection is that it’s incredibly easy and it’s amazing how distractable we are as human beings.

The human brain can really only focus on a few things at a time and those are usually the most obvious things. You can actually get someone to forget all about the task at hand if you overwhelm them with your presence and then make them focus on something off-topic. This is the premise of most of the “mental arts.”

Things like hypnosis, Neuro Linguistic Programming, and mentalism work on the premise that if you distract the brain, you are able to talk directly to the sub-conscious. You can actually speak to the hidden part of the mind to persuade people to do anything within their own personal ethics (no you can’t hypnotize someone into killing your enemy). Learning the skill of Covert Hypnosis will change your life in ways you can’t believe! We strongly recommend this system for anyone striving to get ahead in business, or just looking to create a little influence.

Here’s an example of misdirection, when I was 16 I used to go clubbing. This of course was tricky and I didn’t have any fake ID. A trick that would work sometimes however would be to ask them if my shoes were okay for the club. They’d look down and say yes (obviously only works in good shoes) and they wouldn’t think to ask about my age. Even if they did, the line of people would be getting impatient by now. Of course this didn’t always work but it’s worth a shot and it’s a transferable skill.

Magic is all about misdirection 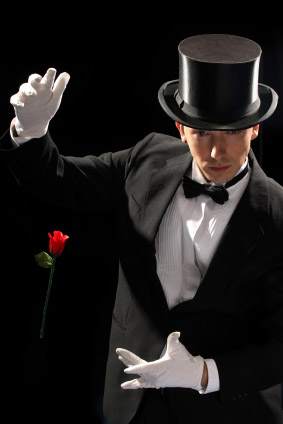 Misdirection is also the cornerstone of magic tricks whereby you direct an audience’s attention to one hand while subtly hiding something/making something appear with the other.

Magicians are incredible at this. Your eyes are automatically attracted to the place he’s pointing his finger. Meanwhile, any number of things can be going on with the other hand. Actually, learning some of the skills on how to do magic is an invaluable skill. Not only does it teach you how to use misdirection, it also makes you interesting and, by default, incredibly charming.

Studies on eye witness testimony have found that wearing a brightly colored shirt while committing a crime can actually make the culprit harder to identify. This is because the witness will have been distracted by the bright color and not have looked at their face.

Another form of misdirection is to use a ‘decoy’. This can be used to hide your true motives or less subtly you can use a partner to cause a distraction while you do whatever it is you’re doing.

Sidewalk grifters make quite a good living at this. While one is performing a song or dance, an accomplice sneaks through the crowd pick pocketing the unsuspecting tourists.

The Element of Surprise

The element of surprise is much coveted in warfare, however it is something that can be useful in all kinds of interactions and shouldn’t be pigeon-holed (The wise man says – only a pigeon will fit in a pigeon hole (I say – What if it’s a really fat pigeon?)).

For example, when asking a question, the element of surprise will help you to get an honest answer or the answer you want to hear. This is because if someone knows you are going to ask them a question they will prepare an answer ahead of time. However if you ask them completely out of the blue then they won’t have time to create a story – they will have to answer truthfully or appear suspicious.

So what do you do if you suspect they may already have prepared an answer? Simple: lull them into a false sense of security. Ask them about their day; ask them if they say the new episode of Scrubs… then BAM! Where were you last night? They’ll be in a fluster and it’ll be easy to tell if they’re lying.

Salesmen use a similar tactic in asking tone of “yes questions.” Essentially, you ask every question that you know is an obvious yes. “Doesn’t it feel incredible to sit in this sweet $150,000 car?” “Hot women love cars like this, don’t they?” As the buyer answers more and more yes questions, he gets lulled into a positive state. Follow a long series of yes questions with a misdirection, and he’s hooked, “Will you be wanting the red one or the black one?” Cha-ching! Sale made!

The most important thing to disguise in psychological warfare is your motives as I have covered earlier. You can disguise your motives with different motives. Essentially, this works on the premise of jealousy. Most people hate someone who gets everything they want. No one likes to see a guy effortlessly do better than them.

How do you overcome this? By making it appear as if you have a different motivation. Go into any yoga studio and you’ll see that one awkward, sweaty guy. Odd are that his friends told him that the place is full of hot chicks and he can clean up there. Obviously, this is the wrong way to disguise you motives because yoga requires a certain amount of grace that’s hard to fake.

A better way is though volunteering. This is a much better situation to meet people and you actually look like you care about something besides meeting people. It helps if you have some kind of interest in the cause you volunteer for.

One neat little trick using disguise is “Covert looking.” You can see everything that is happening around you by looking into any reflective surface. You look like your staring out the window, but you actually reading her text messages in the reflection!

The Trojan horse – here you can make people think you want one thing when really you want another, just like when a sales person rings you up and says “I’m not trying to sell you anything” or “could you please answer a couple of questions for me?” You think, “sure I’ll hear this guy out,” and then bam! They hit you with the sales techniques.

You can use this technique to pick up the opposite sex. If you go up to someone and say “will you go out with me” they might reject you straight off and probably think you’re about 2 years old. However if you ask for their help with something – such as picking a karaoke song, (my personal favorite) then you’ve got a foot in the door.

Another great one is to pretend to be approaching her less-attractive friend and ignore her altogether. This hits so many buttons.

The art of misdirection is really about confusion. When you know enough techniques and tricks, you can never get cornered again.

Posted in Business Psychology, Machiavellian Thought, Relationship Psychology | Comments Off on Misdirection
Tags: how to get the truth out of someone, misdirection, using distraction