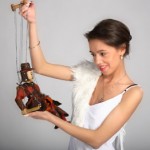 How to Manipulate Men

Make a guy think what you want him to

As usual, there is a great woman behind every idiot.
~John Lennon

So you wanna learn how to manipulate men? Good for you! Men are easy creatures to manipulate, provided you understand a few fundamentals. First of all, the biggest mistake you can make is assuming that men and women are the same, think alike, or are equals. It doesn’t really matter who has the upper hand normally, because the person who understands persuasion techniques is always the boss.

Why do you want to manipulate a man? Are you trying to get ahead at the office? Are you trying to get the guy of your dreams or are you just trying to get your husband to be a little less of an ape? Do you just have a general goal to control men? No matter why you need these valuable skills, it can all be accomplished by putting your target (ahem… loving husband) on a quest. There are no more dragons to slay. There are no more saber toothed tigers to protect against. A man’s world is one of purposeless meandering. That is why Rousing the Lion is the answer to your prayers. If you want to see some “wrapped around your finger” in action, this is the BEST place to start.

One thing at a time

Before we get too deep into how to manipulate men, there is one key thing that you should always do when communicating with men: Only breach one subject at a time. As much as today’s world is about Multitasking, the real, scientifically proven fact remains that men are HORRIBLE at multitasking!

Their brains are wired for tracking and hunting beasts to bring back to the cave. This requires laser sharp concentration. Women’s brains have been focused on gathering food, protecting the babies, socializing, paying attention to social interactions and their meanings, keeping things safe and feeding the tribe. In short, EVERYTHING ELSE.

Women are actually perfectly suited for multi-tasking and excel quite well in fields that require it. Men, as much as they think they can, are pretty bad at it.

What does this mean to someone who is trying to manipulate men? If you really want something or something done, this should be the first (and only) thing on his to-do list. How many times have you sent a man to the store and he got most of the stuff you asked for, but not the few things you mentioned at the end? He just isn’t suited for it.

Women often use absolute words in an emotional way and it drives men insane. “You never say ‘I love you’ to me.” Will be met with, “Of course I do, I said it last June.” If you want to know how to manipulate men, you need to learn to argue logically. “The last time you told me you loved me was in June. Do you not love me anymore?” A logical statement followed by a direct question. “Of course I love you,” can be his only follow up. Well… not his only follow up.

When you make vague and emotional statements, you’re not considering how he loves logic. In fact, there aren’t many men that won’t react emotionally to your charged statement with anything other than anger. Getting a man angry will not help you influence him unless you are trying to influence him to beat someone up (hopefully not you).

We’ve all heard that women say something like 50,000 words a day and men say 14. Men like to solve problems. They talk in absolutes like, “never” and “completely.” They like to say the least amount of words to get their point across.

Sometimes, this is the cause of fights between men and women. He’s just being direct and you feel he’s being rude. To properly manipulate a man, you must speak to him directly. “Do you think you could mow the lawn today?” is a suggestion (a weak one at that). “Mow the lawn today.” Is something that needs to be done. He won’t get upset at this or think of you as a raging bitch provided you say this with a cute smile on your face. Also the more pantsless you are when you say this, the more seriously this will be taken.

Appeal to his logical side

If you really want to get a man to work for you, you need to give him a very businesslike request for help. “I’m failing my class at school.” Is a simple statement that will probably get the response of “study harder.”

If you need some help from your man, give him a time, place and agenda so he can be ready to move on it. You could say, “I need some help studying. Will you help me summarize my chapter in the front room after lunch?” Now he’s all over it. This is a problem that he is going to solve! Now you are appealing to his inherent skill-set and he feels much more appreciated.

Never expect a man to interpret your round about request! Many women believe he should “just know” and help you. They’re not very successful in manipulating men. Men will listen to what your are saying and either think, “That was a statement. Nothing to do here.” Or “That was a question. Here is my answer.” Or even, “That was a problem, let’s roll!”

A man will never ask you, “Do you think you could marry me?” You should never ask him if he could or can do anything for you. “Will you marry me?” This is a definite and absolute question about your actions on the idea. “Can you…” questions are a question about his ability to perform. “Sure, I could paint the house. I have that knowledge!” That doesn’t necessarily mean he will…

Women tend to vocalize their to-do list. They will describe everything on the agenda for the day (or next few) and it drives men crazy. The man’s never-ending desire to fix things kicks in and he will always try to step in and give you advice. You know exactly what you need to do and there he goes again telling you what to do.

In business, when a woman talks like this, the men think you are unintelligent or scatterbrained. You will succeed if you keep these thoughts to yourself and only speak to the conclusions.

Women with higher voices are automatically considered more feminine. High pitched voices are the sign of higher estrogen levels just as a deep voice is an indicator of elevated testosterone. Women who speak in a high pitched voice, activate that “protect the family” response in men. If you’re trying to manipulate men, be sure to break out your higher pitched, sexier voice.

WARNING: Women who have high voices in the business world are seen as stupid or clueless. Having a deeper voice in the business setting is much more likely to get you some respect.

It goes all the way back to his caveman days. If he was wrong, his whole family died. He was in charge of figuring stuff out. Now men are generations away from the caveman, but this issue is ingrained in all of them.

How can you use this manipulate a man? Never offer advice unless a guy is asking you for it. Instead, bolster his confidence by telling him you know he’ll figure it out. This is also the place, where you plant a few ideas. Careful here! Instead of telling him, “you could…”, say something that comes in the form of a question, “if only there was a way to use another sick day so we can extend this wonderful vacation…”

Don’t give a man a chance to be wrong. How about the standard issue of men not willing to stop for directions? How can you get past this so you can get somewhere and get on with your life? Stop for another reason. At the first sign of trouble, have him pull over. The longer you wait the harder this gets, but at the first tentative turn or sign of confusion, say “Could you pull over at that gas station so I can get cigarettes/gum/donuts/condoms?” Ask for whatever, just as long as it’s something you know he doesn’t have in the car. Whoo hoo! A perfect chance for one of you to “confirm” he was heading in the right direction all along.

Inevitably, all influence of men is rooted here. In general, this is the easiest way to get a weak enough man to do everything! You don’t even have to give it up. The simple promise of possible sex is enough to keep him hooked for YEARS.

The problem with this is who wants a bunch of weak men in their lives? All is not lost. You can use sex to influence a guy if the sex is really good. I know what you’re thinking, “Honey, The sex I give is mindblowing!” Is it really?

A vagina is just a vagina to a guy who is desirable. You actually have to break out some serious skills to hook a great man to the point of absolute devotion. Laying there and moaning is not enough. You gotta MOVE. If you really want to be the be-all-end-all for a guy, then you have to develop some hardcore muscles down there. There’s only one way to do that and that’s with The Kegelmaster! You can ask any guy who’s wife or girlfriend uses one of these, and they will let you know how utterly devoted they are to this woman! …and that’s no BS!

When learning how to manipulate men, the key factor you always need to consider is to make everything seem like his idea. You could come right out and say this is what I want, but then you’re handing him a chance to say no on a silver platter. Manipulation is about getting someone to think that your option is the only option. The best way to do this is to approach these situations hypnotically. It also helps if you are a woman he finds irresistible.

For more great information on getting a man to do your bidding, check out Get a Guy to… He’ll never know what hit him!

Posted in Machiavellian Thought, Relationship Psychology | Comments Off on Manipulate Men
Tags: how to control a man, how to manipulate men, manipulate men