how to write with both hands

Learn how to be Ambidextrous

Now you can use both hands!

I’m ambidextrous. I can write just as poorly with either hand.
~Jarod Kintz

My reasons for attempting to become ambidextrous were many. The first was for learning a martial art. I hoped to be able to punch with the same speed and accuracy on both sides. The second was for preparation, preparation for my right wrist (which is royally screwed) becoming too arthritic to work with after an accident. The third was for bodybuilding, to eliminate any lack of symmetry. The fourth was to be able to write this kick-ass article; and the fifth was because I have waaaay too much time on my hands (both hands you could say).

It seems to me as well that we are meant to use both hands. When we are first born our brains are evenly weighted on both sides. Over time however our brains become heavily lop sided, with a right-handed person’s brain being far larger on the left (we use the opposite side of our brain when controlling our hands). Twin studies where one is left handed and one is right handed, have proven the cause to be our dominant limb.

Having learned about brain plasticity in college, I know that this is as a result of our brain adapting to use, and that by the same principle we could once again enlarge the side that has been used less. Scientists have also suggested that enlarging your brain in this way could greatly improve intelligence and creativity.

The first thing to do is to start with doing little things with your weak hand such as brushing your teeth. This is all great until your teeth start falling out. Also start holding cups and picking up objects the other way, but the problem with this is actually remembering to do this since your don’t have to think about grabbing things with your dominant hand.

My Idea was to write at least a paragraph with my left hand every day. This worked perfectly (well, not perfectly) but proved effective and I noticed a marked improvement over a very short space of time. I decided to record my findings over the next few weeks.

Day 1 of the ambidextrous experiment

My left-hand writing is crappy and slow but I’ve written a whole page of nonsense – part of the problem is knowing what to write. I randomly chose song lyrics that came to mind as I wrote. I got all the lyrics wrong, but it somehow looks like handwriting. I won’t be winning any third grade handwriting competitions just yet. It’s a bit early to report on any improvement yet as I’ve only done it once.

I’ve done some reading about it today though and it seems I can expect to possibly become more alert and intelligent but on the downside I may experience depression according to several reports… not cool.

Day 5 of the ambidextrous experiment 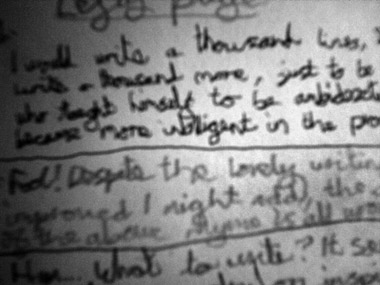 I’m impressed! My left-handed writing is already much neater and quicker. It’s also a lot smaller. My Mom saw it the other day and commented that it was better than my right handed writing. Someone else saw it not knowing what it was and didn’t even comment that it was unusual. Five days! My Granddad was ambidextrous so perhaps there’s a bit of genetics in there?

I still notice a big difference between the hands though, and I’m still not at the stage where I could ever really use it. I couldn’t take notes in class like this; it would take too long and be worthless afterwards. Also the paper tends to move more when I’m using that hand so I still need to use both hands to write.

If I continue at this rate I could be done in no time. I wish I’d started before. Hopefully in the future I’ll be able to write two separate sentences at the same time. If I can play two different melodies on the piano then why not?

Also, a friend from work has started doing it too. Now I can compare results. To add an interesting twist, he is actually left handed which he apparently learned from his Dad (who became left handed after hurting his right hand). That says to me that it can definitely be learned.

Day 12 of the ambidextrous experiment 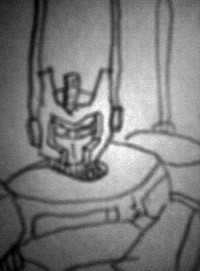 Improvement is still continuing, but although I haven’t experienced any fits of depression (I don’t do depression), I do suspect this is messing with my head somewhat. First of all, my head feels sort of tense. I don’t really know how to explain it and it could well be a placebo or coincidence but still it definitely feels like there’s something there and it feels worse on days where I have done a lot of left-handed writing.

Not to mantion, when writing with my left hand I find strange things happen, like I write entirely the wrong word, or I make really weird spelling mistakes. Then the other day while I was talking I said, “that would never happy.” I meant to say, “that would never happen” – that would never happy doesn’t make any sense! Whether or not this is related I can only speculate, but as others have reported on psychological effects I suppose that it could well be the cause, and Nathan, my friend from work is describing similar phenomenon too (although I think he may have given up already). Either that or I have early onset Alzheimer’s.

Day 16 of the ambidextrous experiment

Day 26 of the ambidextrous experiment

It seems my handwriting with this hand is happy with being simply OK. When you think of it, you spend your whole childhood getting better and better at fine motor skills. I guess it would make sense that I would have the handwriting of a fifth grader after only about a month.

There have been some other great benefits though: I can now brush my teeth with my left hand and I seem to be using this hand to grab things more often. Punching with this hand has become stronger and way more accurate. I don’t have the weird word jumbles any more either. I don’t play video games, but I can see how this might help your game tremendously.

They do say that men mainly use the left side of their brains to communicate. Perhaps this was my brain creating new pathways over to the right to parts of my brain that have never really been used for speech. Either way, this is definitely something that should be taught to children in grade school to increase brain capacity and make it much more easy (them being impressionable and all…)

Can you become ambidextrous? Yes! Will your handwriting ever rival that of your main hand? Probably not, but it’s legible and serves it’s purpose. It seems that the benefits for the rest of your body outweigh the crappy handwriting issue. This really is something you should try!