Turning on an Enemy 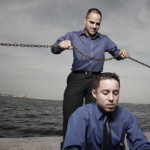 Turning on an Enemy

Getting people on your side

Sometimes, if you want to change a man’s mind, you have to change the mind of the man next to him first.
~Megan Whalen Turner

There’s not really a nice way to say that but turning on an enemy is a useful skill to learn. Essentially, you can get what you want in life if you have enough people to back you up. On top of that, most people are too scared to complain about their discomforts and reservations. All a take-charge person has to do is plant a few seeds. Poof! Enemy gone.

A friend of mine once lived in a house with a guy who dealt drugs. Unsavory characters would come to the house at all hours and she was worried that if he got caught, they’d all be in trouble. On the other hand she didn’t want to report him and didn’t feel she should have to move out.

My advice was to turn the other housemates against him and they would do all the work for her. She followed my advice and it turned out perfectly. She carefully broached the subject with the guy who seemed least fond of the druggie and she found that he was just waiting for someone else to voice the opinion. Now she had an ally.

The two of them could then easily convince someone else who was sitting on the fence. Now they already had the majority vote.

Start with the easy targets

In a situation like this, the goal is to attack the weakest link. In other words, determine which person is most likely to side with you, or who will be most easy to convince and convince them first. Now when you go to the next person you already have someone on your side which can sway a more difficult candidate. As this gains momentum you can also distance yourself from the entire process as the people you’ve “turned” ruminate amongst themselves and no longer need you to convince them.

The situation with my friend could have gone down a much darker path. Had she confronted the dealer directly, then he would have known about her tasty bit of psywar and could have prevented it. Since she started the process long before he knew what was coming, all he could do when all the roommates asked him to leave was to pull out suitcases.

As with all influence, the less involved you seem, the more power you wield. When turning others on an enemy, It’s best to be the most friendly, least invested person involved.

When you’re trying to turn people against someone, it’s always easiest to attack indirectly. Instead of attacking them as a person, attack their values or their behaviors. It will be easier to get someone to agree with you on this point as it won’t seem like they’re being disloyal. For example, in the situation of the druggie housemate, don’t say to the other housemates that you think he’s some kind of monster. In fact, don’t mention them at all. Instead, start with a conversation about drugs and get their opinion on them. Then start trying to lead their opinion and turn the group against drugs in general. Then when the topic of the housemate and his nefarious activities comes up, they’ll already be against his behavior. The rest will follow.

Get them to destroy themselves

No one can destroy your own image better than you can. To further worsen a person’s reputation and getting others to turn on him, you can provoke them into an unfavorable reaction by using a bit of emotional blackmail.

If you know a person well enough to know how to get them angry, attack them on these areas to get them angry in front of their supporters. This is most effective immediately after you have discussed your other qualms with them. They’ll be playing right into your trap.

If it’s your goal to discredit them, you can someone’s argument weaker by geting people to question their motives. Why are they trying to get everyone to do something? Could it be for personal gain?

People hate it when they think someone else is using them for that person’s own personal advancement. Dropping subtle questions about what that person is really trying to accomplish puts a big question mark. This works especially well on people who have an overdeveloped sense of fairness.

How do you find this person? It’s the one who often says, “It’s not fair that [insert complaint here.]” This should always be the first person you bring onto your side. They will be the biggest advocate for turning others against your enemies because they are often the loudest.

The “benefits” of turning on an enemy

Using the word, enemy is where most people get caught up on this article. This can just as easily be used on your friends and family. Wanna go to the movies but it doesn’t seem like anyone else is down? Always start with the friend who’s easiest to convince or at least someone you can “upsell.” “We can go to the theater next to the ice cream place…” Now your salivating friend will help you get everyone else in on your scheme.

People like to know that there will be a great reason to turn on an enemy. Something altruistic or even personally beneficial to the turncoat, just try to steer the direction on the influence away from greed. You don’t want people to feel guilty that they’ve sold out a friend.

Posted in Business Psychology, Machiavellian Thought | Comments Off on Turning on an Enemy
Tags: dealing with jerks, get rid of enemies, getting people on your side, turning on an enemy