Psychological Warfare in your everyday life

For, after all, how do we know that two and two make four? Or that the force of gravity works? Or that the past is unchangeable? If both the past and the external world exist only in the mind, and if the mind itself is controllable – what then?
~George Orwell 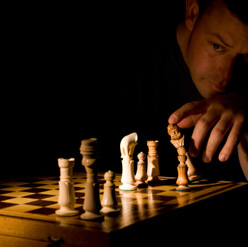 What is psychological warfare? It was Sun Tzu who originally said that the best kind of victory was one in which you never have to fight. This is very true, and a victory that only you know about will cost you and your opponent far less – it’s simply tactical.

If you get that, then you’re thinking along the right lines and should get the purpose of Psychological Warfare. It’s a site dedicated to examining what it takes to understand the human psyche and using that understanding to get the things in life that you desire.

It’s not as sinister as it sounds…

To put it plainly, we will be delving into the world of psychological and sociological theories, and applying that advice to every day situations – dating, business and self improvement.

Not only does this information on Persuasion, Influence, and Manipulation benefit all aspects of your life, the knowledge itself, makes it much more difficult for people to scam you or lie to you.

The Benefits of Psychological Warfare

How would it feel to be able to score the man or woman of your dreams, get the job or raise you’ve been dying for, and have everyone consider you intelligent and charming? It’s not that hard. It just requires you to open up your mind to some of the concepts of psychological warfare and reading some of the brilliant books we recommend.

Once you get good at second guessing your opponents in all these fields and manipulating the odds, things in your life will simply start to click. Knowing this psychological warfare information can prove to be great fun in learning how to manipulate people subtly to help them also get what they want. It’s also a perfect way to get precisely what you want from life and maneuver yourself into a position of power without anyone else even realizing.

Many of the origins of psychological warfare and manipulation originate from books like Sun Tzu’s Art of War and Niccolo Machiavelli’s The Prince.

Originally written in Italian instead of the aristocratic Latin, The Prince caused quite a stir for it’s cynical, often brutal advice on how a new ruler, “the prince” is to be successful in setting up his new republic. It requires the new prince to be an outstanding and outspoken public figure who secretly does everything necessary to further the goals of his rule.

The term “Machiavellian” was coined to describe using cunning and often deceitful practices in politics. It’s also used to describe a brilliantly conceived and executed plan.